Evaluating an ESOP from a Succession Planning Perspective 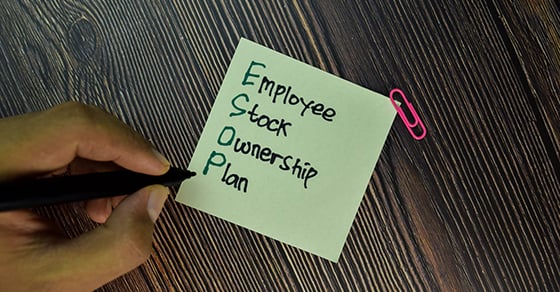 If you’ve been in business for a while, you’ve probably considered many different employee benefits. One option that might have crossed your desk is an employee stock ownership plan (ESOP).

Strictly defined, an ESOP is considered a retirement plan for employees. But it can also play a role in succession planning by facilitating the transfer of a business to the owner’s children or employees over a period of years in a tax-advantaged way.

Although an ESOP is a retirement plan, it invests mainly in your own company’s stock. ESOPs are considered qualified plans and, thus, subject to the same IRS and U.S. Department of Labor (DOL) rules as 401(k)s and the like. This includes minimum coverage requirements and contribution limits.

Generally, ESOP distributions to eligible employees are made in stock or cash. For closely held companies, employees who receive stock have the right to sell it back to the company — exercising “put” options or an “option to sell” — at fair market value during certain time windows.

While an ESOP involves transferring ownership to employees, it’s different from a management or employee buyout. Unlike a buyout, an ESOP allows owners to cash out and transfer control gradually. During the transfer period, owners’ shares are held in an ESOP trust and voting rights on most issues other than mergers, dissolutions and other major transactions are exercised by the trustees, who may be officers or other company insiders.

One big difference between ESOPs and other qualified retirement plans is mandated valuations. The Employee Retirement Income Security Act requires trustees to obtain appraisals by independent valuation professionals to support ESOP transactions. Specifically, an appraisal is needed when the ESOP initially acquires shares from the company’s owners and every year thereafter that the business contributes to the plan.

The fair market value of the sponsoring company’s stock is important, because the DOL specifically prohibits ESOPs from paying more than “adequate consideration” when investing in employer securities. In addition, because employees who receive ESOP shares typically have the right to sell them back to the company at fair market value, the ESOP essentially provides a limited market for its shares.

Although ESOPs can be an important part of a succession plan, they have their drawbacks. You’ll incur costs and considerable responsibilities related to plan administration and compliance. Plus, there are costs associated with annual stock valuations and the need to repurchase stock from employees who exercise put options.

Another disadvantage is that ESOPs are available only to corporations of either the C or S variety. Limited liability companies, partnerships and sole proprietorships must convert to the corporate form to establish one of these plans. This raises a variety of financial and tax issues.

It’s also important to consider the potential negative impact of ESOP debt and other expenses on your financial statements and ability to qualify for loans.

There are about 6,500 ESOPs and equivalent plans in the United States today, with roughly 14 million participants, according to the National Center for Employee Ownership. So, if you decide to launch one, you won’t be alone. However, careful planning and expert advice is critical. We can help you evaluate whether an ESOP would be a good fit for your business and succession plan.